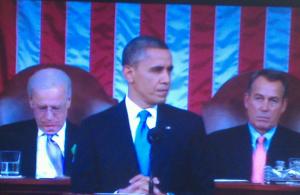 “He shall from time to time give to the Congress Information of the State of the Union, and recommend to their Consideration such Measures as he shall judge necessary and expedient…”

For 224 years, the President of the United States has given annual reports to Congress as to the state and future of our union. President Obama delivered his state of the union address to Congress and to the people of the United States February 12th, revealing the left-from-center agenda of his second term, and the steps his administration plans to take to meet this lengthy list of goals.

Obama appealed to Congress to consider his propositions, asserting that “Each of these proposals deserves a vote”. At the same time, he conceded that no legislation will obliterate all of society’s problems, but also that “We were not sent here to be perfect. We were sent here to make what difference we can, to secure this nation, to expand opportunity, and uphold our ideals through the hard, often frustrating, but absolutely necessary work of self-government. We were sent here to look out for our fellow Americans the same way they look out for one another, every single day…”