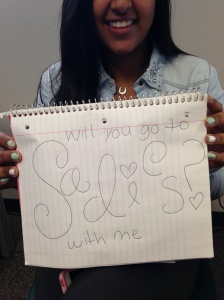 What makes Sadies so exciting to high schoolers is its uniqueness when compared to all other dances. We all know the one big thing that sets the Sadie Hawkins dance apart; girls asking the boys. This is, of course, fun and exciting and also very different than all of the other dances we offer. But who was it who thought of this out-of-the-norm idea, and why exactly did they want to?

Sadie Hawkins was inspired by a comic written by All Capp, called Lil Abner, on November 15, 1937. The strip was basedaround a day where unmarried women could choose a bachelor in hopes of finding someone to marry. Sadie Hawkins was the loneliest girl in town, and her father started this annual day for fear that she’d live at home with him for the rest of her, (and his) life. So he created Sadie Hawkins day, where they held a foot race where all unmarried girls could chase men around the town, resulting in matrimony with whomever they caught. All of the men dreaded the day for fear they’d get stuck with her, or any of the other maidens they didn’t like. Harsh, right?

Only two years after the release of the comic strip, (and all of the years to follow,) colleges and high schools all over the nation began holding “Sadie Hawkins Dances”, where it was the girl’s duty to ask a boy to be her date. Because the day became so popular, Capp continued to write about Sadie Hawkins and the foot race annual in his comic strip for a few years.
It may seem a little silly that an entire dance and event became so popular, especially when it derived from a comic book about girls who literally chase men around their town. The independent and capable feeling women got from getting to chose their own dates seemed to be completely empowering. Girls all across America adored the idea of picking their dance partner rather than feeling obligated to agree and go with the first boy who asked them.

In modern times, girls asking boys to do things like go to dances, date them, or even marry them are far from unheard of. Women are far more independent now than they were in the days of Capp. This doesn’t mean the dance is losing its appeal, however. Many girls are excited to have their turn to get creative with “dance asking” ideas, and many boys are happy that they can finally sit back and relax and be the one who gets the fun surprise for a change. Sadies gives many girls the golden opportunity they’ve been waiting for!